It is not a typical royal residence but a terraced house on a quiet and slightly dishevelled housing estate in Sale, Greater Manchester, is now the home of the new king of Rwanda.

Three months after the country’s previous exiled monarch King Kigeli died in relative poverty in the US aged 80, an official decree by his chief courtier has declared his nephew Emmanuel Bushayija – a naturalised British citizen – as his successor.

“The Rwandan Royal Council of Abiru hereby informs all Rwandans and friends of Rwanda that in keeping with the ancient custom, it has acclaimed His Royal Highness Prince Emmanuel Bushayija as the successor of his late majesty,” the edict read.

In a video posted on Facebook, Boniface Benzinge, who describes himself as the deceased king’s assistant and best friend, reads a statement over tinny piano music saying that Kigeli had named his brother’s son as his successor in 2006 and that he wished the new king “long life and success”.

Father of two Bushayija, or Yuhi VI as his new royal title has him, has so far remained silent about the announcement. Answering the door of his neat and well kept house on Wednesday morning, a family member said he was not in and would not be speaking to the press.

The Rwandan royal family was exiled in 1961, when Bushayija was a baby, and he was schooled in Uganda, where he later worked for Pepsi. He moved back to Rwanda in 1994, before relocating to the UK in 2000.

He first lived in a council flat near Old Trafford, before moving to his current terraced house, which is owned by the Irwell Valley housing association. Company records show that he started a security company, Intersec Security, in 2013, which is registered to his home address but provides armed security for clients in Rwanda.

Wendy Otoo, 50, a foster carer who lives two doors down from the family, said Bushayija had mentioned his big news to her husband, but that she didn’t think it would change much for the family.

“He’s very laid back and humble,” she said. “He’s a lovely man. I look after my granddaughters full time and he’s great with them. He always stops for a chat, so he’s not very king-like.” She added: “It’s funny because my family are from Ghana on my Dad’s side, and my uncle there is a king.”

The first Dola Tope–Agboola, 43, heard about her royal neighbour was when a journalist knocked on her door on Wednesday morning. “It’s just amazing to be honest,” she says. “I’m going to be on the look out for him. I should get to know him.”

Rwanda became a republic in 1961 following a referendum, a year before it gained independence from Belgian rule. The result suggested that 80% of the public opposed the monarchy but King Kigeli claimed that the vote had been rigged. 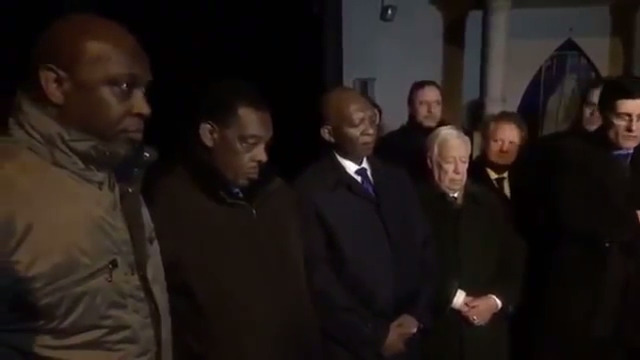 King Emmanuel Bushayija Yuhi VI (third one from left to right), with Boniface Benzige in Fatima-Portugal, during the ceremonies of prayers and in memory of King Kigeli V, this week. Photo (c) Therwandan youtube

In 2013, Washingtonian magazine found Kigeli living in subsidised housing in Virginia, living off food stamps. He told the magazine that Paul Kagame, president of Rwanda and a fellow Tutsi, had permitted him to return to his home country but said that he could not resume the throne.

While alive, Kigeli spent much of his time attempting to preserve the traditions of the Rwandan monarchy, subsidising his small income with the sale of knighthoods, and hoping that his people would one day invite him back.

Following his death, a row broke out about where he should be laid to rest and a US court ruled in favour of relatives who wanted his body returned to Rwanda. Benzinge insisted that his friend would not have wanted to be buried in his home land “as long as the current government administration that was hostile to his majesty in life was still in power”.

Benzinge’s announcement that Bushayija is the new king has also been controversial. Pastor Ezra Mpyisi, a former adviser to the Rwandan king, told journalists in the country’s capital that he would not recognise the new king.

“[Benzinge] cannot name the new king because he is in no position to do so. He has no powers to do so because he is not part of the royal family or related to the king in any way,” he said.

• This article was amended on 13 January 2017. An earlier version said Rwanda became a republic in January 1961 following a referendum. The referendum was in September 1961.